Why You Should Not Be Too Embarrassed To Run 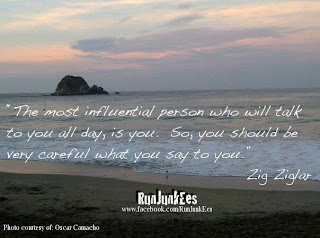 While out for my early morning run today, I happened across a fellow runner.  He was a big guy and I would not be exaggerating to say he was obese.   It looked as if he was doing a run/walk/run method.  He wasn’t going very fast and I saw him take at least one walk break.  By no means, was he “slacking”.  It was very apparent this guy was putting effort into what he was doing.  As I got closer I couldn’t help but be filled with a sense of admiration.  I said good morning as I passed and continued on my run.
It got me thinking about a conversation I had with another fellow runner, not too long ago.  This lady, who was also overweight, was struggling to “keep with it.”  She told me she would only run on a treadmill because she was “too embarrassed” to be seen in public.  When I asked her why she would be embarrassed for trying to better herself she told me she just didn’t feel like a runner and felt she would be ridiculed by other runners.  I’ll share with you what I told her.
If you are a new runner or even a walker (non-zombie type) aspiring to become a runner DO NOT feel embarrassed by making the effort.  As an experienced runner, I’ve learned that you will encounter two types of people (generally speaking); runners and non-runners.

Runners-
﻿Runners will support you.  Runners respect the effort.  Runners, both new and experienced, will admire you.  Most runners had to learn to become runners ourselves.  I promise you that most do not care about your pace nearly as much as you do.  Runners will tell you “good job” not because they are just trying to be nice, but because they truly understand that what you are doing is not an easy thing to do.  Runners truly are the GREATEST and the most supportive group of people you could ever want to be around.  Slow or fast, runners are filled with pride when they see you making the effort.   Now don’t get me wrong, just like with anything there are those small percentages of runners who think they are God’s gift and that their shit doesn’t stink but I can assure you those are not the majority.

The first time you stand amongst the crowd at the start of a race you will discover how different each of us are but how much we all have in common.  It's an unforgettable experience and the reason why you don't hear of very many people who only do one race.

Non-Runners-
There are really two groups of non-runners which I affectionately refer to as the lovers and the haters.
You’ve probably seen it worded and phrased in a number of different ways but all of the sayings are trying to tell you the same thing.  If you run, you’re a runner.  It doesn’t matter how fast you go, you’re still lapping they guy/girl on the couch, etc., etc.    The best piece of advice I can give you is to always remind yourself of who you’re doing this for.  Why do you run?  Do you run for that person driving past you?  Are you running for the guy running faster than you in a race?  Are you running to impress “experienced runners”  I think once you start to be honest with yourself about why you run, you will have a much easier time dealing with all of the other negative thoughts that my seem to discourage you.
So the next time you're out their making the effort don't feel embarrassed, feel proud.  I can assure you there are far, far more people who are being inspired by what you're doing than not.
Posted by RunJunkee at 12:23 PM