My First 3sum- An Altra Review

As a happily married man I would have never expected to be writing a post titled "My First 3sum". Suffice it to say, I'm appreciate Altra affording me the opportunity to do so, even if it is only in regards to their new tri shoe. 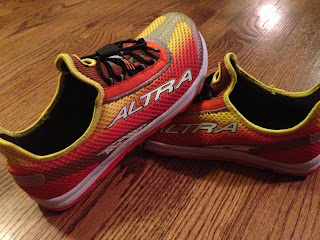 Although, as luck would have it, I did find this to be one sexy looking shoe.  As a shoe that was designed with the triathlete in mind I was not sure if these would be a good fit for me.  But after logging about 50 miles in these shoes I've found that they can work for us running simpletons, as well.   The 3sum is a lightweight shoe built on a semi-firm 18mm zero drop platform and offers a comfortable ride most suitable for short to mid distance runs.  While it's true that some minimalist shoes can have a zero heel to toe difference ratio, not all Altra Zero Drop™ shoes are minimalist.  They actually offer a wide range from minimal to cushioned shoes.  You can learn more about Altra here.
When I first tried the shoe on, I did so with thin sock.  There was some noticeable slipping in the heel, despite the good forefoot fit.  (as a side note this shoe was not as wide as the Superior, which was a bummer for me but they were still more roomy than most traditional shoes)  I switched to medium thickness sock and this took care of the slipping but made the forefoot area feel tighter.  Finally, I gave in and tried it sock-less.  The seamless upper, built in tongue and padding in the heel area make this a shoe that appears to be built to be worn sock-less.   After doing a couple of test runs both with and without socks, I found the ride more enjoyable and the fit more secure without socks and the problem of the heel slipping was no longer a factor, once I was running.  I was a little leery about blisters from running sock-less but after several runs, with one has far as 10 miles, in the heat, that has not occurred.  Outside of my one, what we will call "dork run" in which I wore a thin sock on one foot and sock-less on the other, all of my runs in these shoes have been sock-less.  ﻿﻿﻿﻿ In the dork run I didn't notice any significant difference in the overall fit of the shoe, however the shoe did seem more breathable on the sock-less foot. ﻿


﻿
﻿ These shoes come with a quick lace system by a company called Yankz which allows for a quick easy on and off when transitioning. The quick lace system can be a bit intimidating if you have not used them before. However, once they are properly adjusted it is a nice added feature. The key to the adjustment is not to make them too tight.  After they are adjusted properly it's recommended that you knot and cut off the excess lace.  Rather than doing that I chose to tuck  the extra lace in the laced area in hopes that I can use them in my next pair of shoes. I replaced a quick lace with a traditional shoe lace just to see if it changed the comfort or fit.  I didn't see any noticable difference in the two.  So +1 for the lazy side of me that doesn't want waste time tying shoes. 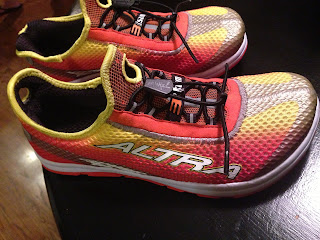 A couple other features of this shoe which were a bit out of my norm were the eyelet holes at the tongue and in the heel, the higher heel counter and the holes in the sole of the shoe.  I learned more about these from my expert triathlete friends, the Midwest Misfits﻿. 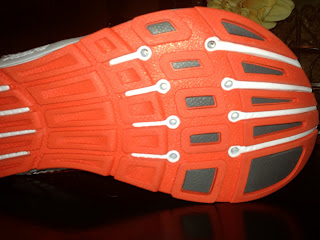 As with anyone new to the minimalist or zero drop running it's a good idea to make a slow transition into these shoes.  Visit the AtlraZeropDrop.com website to learn more.  At 8.2 oz and a performance like feel, I think Altra nailed it with these!

And, just in case you were wondering what these bad boys look like after the first 50 miles 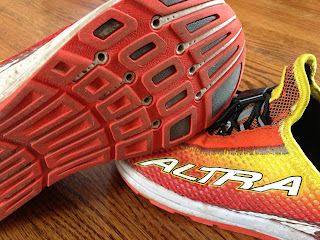 Posted by RunJunkee at 5:05 PM