On Saturday February 18th I took a trip to Rockford, Il. with some of my fellow Midwest Misfits to run in the Rock Cut Survival Trail Run.  The race is put on by a great group called the Rockford Road Runners.  It's a series of trail runs that span from Dec to Mar.  If you successfully complete all of the races (5k, 10k, 15k, 20k) you receive a survivor shirt.  This was my only run in the series so I won't be receiving the cherished shirt, however there were many lessons learned from my first real trail race.

I say real because I had previously run a 5k trail race but nearly half it was on paved roads and the rest was flat!  Rock Cut State Park was anything but.  It was a gnarly up and down course with plenty of "obstacles" and challenges along the way.  As an inexperienced trail runner my expectations in the race were few;  Finish & pass more than I was passed.  I accomplished both of these goals and finished my 15k in 1:27:30.  But more importantly, I learned several insightful lessons about the world of trail races and how they differ from the road races I've grown so accustomed to. 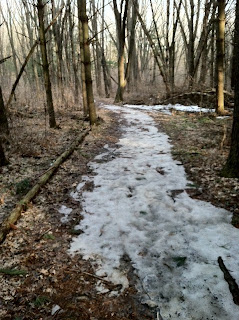 First-  Watch your Step!  How many times have you heard or even said that in a road race?  You come across some obstacle in the road; a pot hole, uneven pavement, trash, etc.  We're always good about warning our fellow runner.  That is not so much so in trail running.  It's not because people are uncaring or rude.  It's because if you said watch your step every time you came across a hazard on the trail, you'd say it a million times!  On a trail race you have to watch every step.  Looking away for even a moment, can be costly.  And yes, I learned this first hand.  Within the first mile of the race I caught my foot on a rock that was protruding from the ground.  Immediately after it happened I started to wonder if I'd be able to go on.  But I did (obviously).  I don't think it's anything too serious but its swollen up pretty nice and is a lovely shade of purple on this the day after the race.


Second- In a previous post I had suggested YakTrax for winter running.  I was shown something way cooler.  Prior to the race we screwed 3/8 inch hex screws into the soles of our shoes.  They were highly effective.  You definitely knew who had screws and who didn't when we got to the icy patches of the trail.  I still managed to fall 3 times (About once every 5k).  But I'm sure it would have been more had it not been for my pre-race screwing.  My third fall was by far my grandest.  It was a face first slide through the mud.  I made enough noise, as I hit the ground, that even the guy in front of me turned back and asked if I was ok. 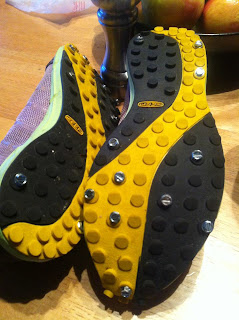 Third-  The start line.  I've gotten away from always needing to be at the front of the pack, when the race starts.  I figure if you're faster than me you should be in front of me and if I'm faster..start where ever you want because I'm gonna pass you at some point.  Trail racing, at least single track trail racing, seems to be a little different.  There were many times when I would have to wait for an opportunity to pass someone.  There was just no where to go.  I don't think it slowed me down too much but lesson learned.

Fourth-  Unless you're competing.  Trail racing is more laid back.  There is not as much crowd support but I don't think you need it.  There is so much to take in and appreciate about your surroundings. This combined with the added focus on ground the miles seemed to fly by.  Many runners chose to walk some of the steeper hills, although some you really had no choice. 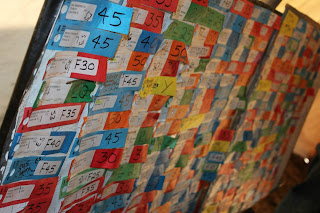 The start for this race had a count down clock.  When the clock hit zero, it started.  No on your mark, get set....just pay attention!!  This race was not chip timed, instead you received a color coded tag which was pinned to the back of your shirt.  Once you crossed the finish line the tag was removed and immediately taped to a board.  Instant results!  You knew where you placed and who was in front of you.


Some highlights of the race included several steep hill climbs.  One so steep that they had a rope tied off to a tree at the top of the hill to assist runners in scaling the hill.  This hill was strategically place about midway through the course (or, just after my first fall but prior to my second).  The first hill we climbed had a sign positioned at the summit which read "Mt. Larry" (affectionately named after the race director).  The race had a net elevation change of -619 feet.  The first mile was all down hill and then most of the inclines and declines were about 100 feet.   The course was pretty muddy and icy in spots.  Rocks and tree roots were waiting to catch the inattentive runner, all along the course.  I especially liked the section of the course that was lined with tall pine trees.  It was amazing how quiet it was in this area of the race.


I can hardly wait for the next one.

Email ThisBlogThis!Share to TwitterShare to FacebookShare to Pinterest
Labels: Dirty Side Diaries, Races